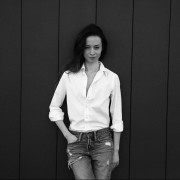 Developed in great secrecy, Phantom I was revealed in 1925 and proved an instant success. With its all-new 7.6-litre, straight-six engine, Phantom eclipsed all rivals for speed, power and reliability, and immediately secured its status as ‘The Best Car in the World’. This priceless example, on loan to the Exhibition from the Petersen Automotive Museum in Los Angeles, was originally owned by the American dancer, singer and actor Fred Astaire (1899-1987). Coachbuilders, Inskip of New York, added bespoke door handles, rear indicators and other features inspired by the Art Deco style, while the motoring trunk, an extremely rare piece handmade by Louis Vuitton, contained Fred’s trademark top hat, white bow tie and dancing shoes.

In a career spanning seven decades and more than 30 films, Astaire became one of Hollywood’s most beloved and enduring stars. As a dancer, notably with partner Ginger Rogers, Astaire achieved a grace and perfection that changed musical cinema – just as Phantom would became the standard by which all other motor cars were judged.

The car has been generously loaned to the Exhibition by the Petersen Automotive Museum, Los Angeles.

On 22 February 1933, Sir Malcolm Campbell set a new World Land Speed Record of 272 mph (438 km/h) at Daytona Beach, Florida. He had broken the record on no fewer than six previous occasions. But this was the first time that his car, Blue Bird, had been equipped with a Rolls-Royce engine – specifically, a 36.5-litre, 2,600hp ‘R’ series aero engine, whose later incarnations would power the immortal Supermarine Spitfire.

To celebrate his achievement, Campbell took delivery of a new Phantom II Continental. Introduced in 1930, this was a ‘sportier’ version of the Phantom II, with a shorter wheelbase, improved balance and uprated springing. At 95mph, its top speed was modest by Campbell’s standards, yet highly impressive for a car weighing almost two-and-a-half tons. And with typical Rolls-Royce inventiveness, the pearlescent glow of the car’s pale-blue bodywork was achieved (so the story goes) by adding ground herring scales to the paint. But Campbell wasn’t finished with record-breaking. In September 1935, on the famous Bonneville Salt Flats in Utah, a radically redesigned Blue Bird, with the proven R-series engine, attained 301.29mph – the first car ever to exceed 300mph.

The car has been generously loaned to the Exhibition by Richard Biddulph.

Field Marshal Bernard Law Montgomery’s victory at El Alamein in 1942 helped turn the tide of the Second World War. Universally known as Monty, his famously ascetic lifestyle earned him another nickname; the ‘Spartan General’. Yet this disciplined, forthright soldier allowed himself one indulgence. In the matter of his personal transport, he would accept only Rolls-Royce.

Monty had the use of three Phantom IIIs during the Second World War; the car on display, known as the ‘Butler’, was his favourite – indeed, he grew so fond of it that he kept it until 1962. Built in 1936 for Alan Samuel Butler, chairman of the De Havilland Aircraft Company, its distinctive front-sloping windscreen made it 15 per cent more aerodynamically efficient than the standard model. As his official car, it effortlessly conveyed Monty on vital military business to 10 Downing Street, the War Office, Chequers and NATO Headquarters in France. Yet it was far more than just transport. In Monty’s mind, Phantom stood for permanence, solidity and reliability – a powerful and reassuring signal to the troops from the man who held their lives in his hands.

The car has been generously loaned to the Exhibition by a private collector.

Born Sultan Muhammad Shah in 1877 in Karachi (then part of India), the Aga Khan III became the 48th Imam to the world’s 15 million Nizari Ismaili Muslims when he was just eight years old. Unlike his predecessors, he received a modern western education as well as a traditional religious training, and fulfilled both his secular and spiritual roles with great skill until his death in 1957. He is particularly remembered for his devoted patronage of English flat racing. He owned five Epsom Derby winners and was named Champion Owner no fewer than 13 times.

His impeccable eye for pedigree and quality extended beyond racehorses to motor cars; and with its beautiful flowing lines, his Phantom IV is a true Thoroughbred. It’s one of only 18 ever built, including two test models which were not offered for sale: the remaining 16 were all bespoke commissions for Royalty and Heads of State, and every one still survives. This car, restored to its original green finish, was the only Phantom IV to be built in the Sedanca de Ville style, and includes numerous bespoke additions, many engraved with the Aga Khan’s royal crest.

The car has been generously loaned to the Exhibition by the Tiriac Collection.

In their brief but world-changing career, The Beatles reinvented themselves many times. So it’s fitting that the Phantom V owned by John Lennon was not always as it appears today in the Exhibition. In fact, when he took delivery of it on 3 June 1965, it was finished in restrained, respectable Valentine Black. But as he later admitted, Lennon had always wanted to be an eccentric millionaire. With his PhantomV, he realised that dream in full. Taking full advantage of the marque’s bespoke capabilities, Lennon had the car customised in true rock-star style, complete with television, telephone, refrigerator, record player – even a double bed in place of the rear seat.

In April 1967, Lennon asked coachbuilders JP Fallon to repaint the car, in time for the worldwide release of the newly-minted Sgt. Pepper’s Lonely Hearts Club Band on 1 June. Frequently described as ‘psychedelic’, the design is no random swirl, but actually a carefully-constructed floral Romany scroll, as seen on traditional narrowboats and gypsy caravans, with a zodiac symbol on the roof. When Lennon moved to the USA in 1970, the car went with him, and was loaned out to other rock stars including The Rolling Stones, Bob Dylan and The Moody Blues. In 1977, it was donated by billionaire Jim Pattison to the Royal British Columbia Museum in Canada.

The car has been generously loaned to the Exhibition by the Royal British Columbia Museum.

The British Royal Family was an early adopter of the ‘finest cars in the world’: Edward VIII bought his first Rolls-Royce in 1919 and went on to own a further nine. The connection strengthened further in 1950 when the then Princess Elizabeth and Prince Philip took delivery of the first Phantom IV just after their marriage. Twenty-seven years later, to celebrate The Queen’s Silver Jubilee year, this PhantomVI was presented to Her Majesty, and served as her principal state car until 1992. It made a memorable reappearance in 2011, when it brought Kate Middleton and her father to Westminster Abbey for her marriage to Prince William.

The car is custom-built, with a number of features specially designed for its unique role. As part of the royal fleet, it’s finished in Royal Claret Livery and does not require a registration plate. When The Queen was aboard, the Spirit of Ecstasy was replaced by the royal mascot: a fitment over the windscreen held her personal silver coat-of-arms and flag. The raised roofline accommodates an enormous expanse of toughened glass, enabling The Queen to see and be seen by the crowds lining her route.

Her Majesty Queen Elizabeth II has graciously assented to her PhantomVI State Limousine being present at‘The Great Eight Phantoms’ – A Rolls-Royce Exhibition – for the British public to see.

The first Phantom to be built at Goodwood heralded both the launch of the seventh generation, and the renaissance of the Rolls-Royce brand under the custodianship of BMW Group – a feat described at the time as “the last great adventure in automotive history”. Rolls-Royce designers and engineers spent four years developing the car, under the strictest secrecy, in Germany and the UK. As the clock struck one minute past midnight on 1 January 2003, the first customer received the keys at a ceremony to mark the opening of the new Goodwood manufacturing plant and headquarters, and the official launch of Rolls-Royce Motor Cars Limited.

The car’s Black Kirsch bodywork, black leather interior and burr walnut veneer show almost no signs of the car’s 14 years’ constant service, in which it has covered over 30,000 miles, including an epic 4,500-mile jaunt across Australia from Perth to Sydney. The first production car built to a new design, by a new workforce, in a new facility, it is truly the first of its line, and the benchmark for every Goodwood-built car that has come after it.

The car has been generously loaned to the Exhibition by the owner.

Wholly new, yet unmistakably sharing the same DNA as its predecessors in the Exhibition, the New Phantom is the most luxurious, technically advanced and intelligent Rolls-Royce ever made. It’s underpinned by an all-aluminium spaceframe, the ‘Architecture of Luxury’, that will underpin every future Rolls-Royce.This is married with an all-new 6.75-litre twin-turbo V12 engine to deliver the marque’s signature ‘Magic Carpet Ride’. It’s also the first Phantom in which the Pantheon grille is integrated into the surrounding bodywork; the Spirit of Ecstasy is raised higher, while the headlamp features the latest development of Rolls-Royce laserlight technology.

Touch a sensor on the handle and the door whispers closed of its own accord. Inside, the interior, known as ‘The Suite’, re-defines Rolls-Royce comfort and refinement. The experience includes ‘The Gallery’, where customers can choose their favoured artist to work with Rolls-Royce to create a truly individual artwork of art spanning the width of the dashboard. This is a Phantom truly worthy of the name, and the new definition of luxury for our times.